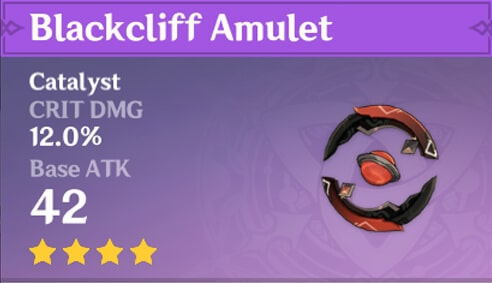 A mysterious catalyst made of blackstone. It has an ominous crimson glow that seems to pulse in synchronization with the tremors from deep within the earth.

How to Get Blackcliff Agate?

Just like any other weapon, Blackcliff Agate also have special effect. The higher rank of weapon refinement, the effect will become stronger with highest number at refinement rank 5.

GenshinDB.ORG is database for Genshin Impact Game which available for Switch, Switch, Playstation 4, and mobile game app on iOS and Android.

GenshinDB.ORG is not affiliated with or endorsed by miHoYo.