Before farmers treasure quest appear in your journal, you will have to do some step below:

Head to Konda Village and Check the Missing Persons Poster.

Head to Konda Village and read information written on the Missing Persons Poster.

Talk to Saimon Eri Near Teleport Waypoint in Konda Village

She will tell you about his son, Saimon Jirou went off to join the army but gone missing. her husband decided to leave village to go look for him. 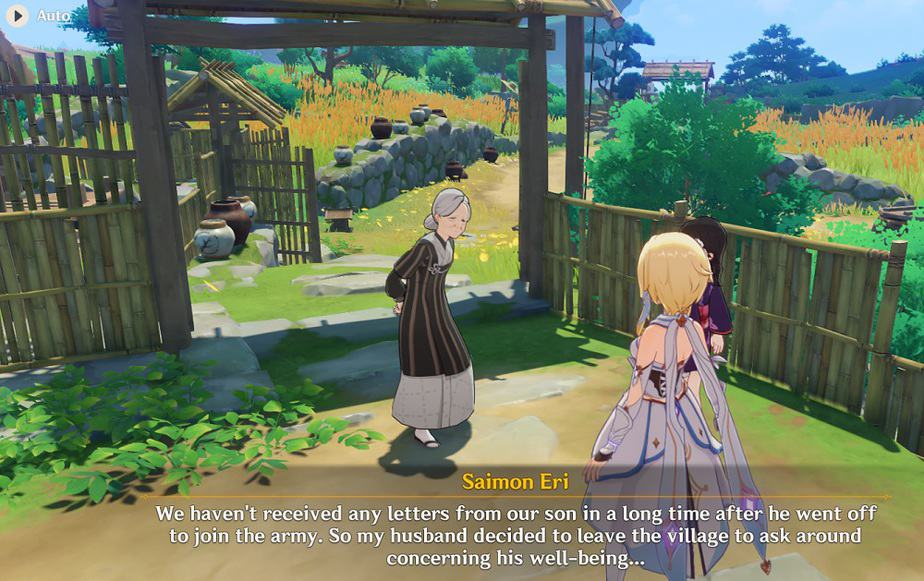 You can reach the island by using Waverider. After that, head to the marked location on the map.

When you are arrive on top of the island, someone (“???”) will ask you for help. Fight the enemy and then talk to him.

He will ask you to freed him first. You can find the cage key from the tree in that area.

Freed him and talk to him again

After getting out of that area, he will introduce himself as Saimon Jirou, the missing person from Konda Village. He then will ask you to to collect 4 Old Stone Slate.

All 4 Old Stone Slate can be obtained during progress of Sacred Sakura Cleansing Ritual world quest:

Can be found in Kairagi Camp near Waverider location.

Can be found underground during A Strange Story in Konda, first part of Sacred Sakura Cleansing Ritual world quest.

Can be found in pile of dirt near 5 cubes puzzle inside Araumi underground ruin. The location can be unlocked during Cleansing Defilement in Araumi, second part of Sacred Sakura Cleansing Ritual world quest.

Can be found in the ship wreckage near underground teleport waypoint. Accessible during Cleansing Defilement world quest, or read: How to Open Underground Teleport Waypoint and Domain.

Report back to Saimon Jirou in Jinren Island

After you get all 4 old stone slates, quest will appear in your journal. Head to Jinren Island and talk to Saimon Jirou. He will tell you that there’s fifth Old Stone Slate

You won’t find anything here. Turned out Saimon Jirou tricked us, time to confront him.

Go to the marked location. You will find Saimon Jirou asking for help, again.

Talk to Bandit leader, he then will tell you about how Saimon Jirou fooled them as well and want to settle score. Just like we do.

There’s 4 waves of enemy, defeat them all and then talk to Saimon Jirou once again. He will give you the key, use it to open “Treasury”

Place your 4 old stone slates in the middle of empty part of puzzle. After that, solve the puzzle. The catch is, walk through all stone slates without repeating steps just like puzzle when you’re unlocking Empty Boat of Thousand Gates domain.

Open the treasure box, just to find out that there’s nothing inside. After that, dialogue with Saimon Jirou will popped out. Convince him to go back home.

Report Back to Saimon Katsumi in Konda Village

Head back to Konda Village and listen to Saimon family talk. You can read the story, it’s quite interesting and somehow connected with Konda Village chief statement during A Strange Story in Konda. Or just skip it entirely

In the end of their family dialogue, Saimon family will give you Saimon Heirloom Blade Diagram which is blueprint for craftable Inazuma sword: Amenoma Kageuchi along with Northlander Sword Billet to craft it.